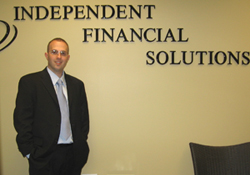 Our founder, Greg Napolitano, started his career as an agent at a captive agency (carrier). He found that he could not properly provide solutions for all of his client’s needs in this model, thus a solid financial strategy could not be implemented with such limited products. With this in mind, Greg moved on and founded Independent Financial Solutions, Inc.

The brokerage model allowed our brokers to fulfill their client’s goals and objectives. Greg found that many of the brokers were operating as agents of Independent Financial Solutions. Our agents were working with us to custom tailor their cases while having access to virtually any and all products needed. In addition, our agents had the assistance of an experienced support staff to help them from the beginning through the implementation and placement of their cases, while receiving high compensation rates.

Up until then agents were typically either an independent broker or a full time captive agent. The broker received no annualization, no fringe benefits and typically worked from home while not truly being part of any organization.
The agent was captive – had to be part of the organization, pay fees for the privilege, did not own their clients (had a non-compete) and had to sell what was in the best interest of their carrier, not their client.

As our agency grew it garnished the attention of some large carriers looking to have our agency associated with them.  They admired our steady growth, our platform, our mission statement and our success. After some time Greg decided the best path for IFS and its agents was to partner with Ameritas.

Presently IFS is one of the largest Ameritas agencies in overall production and man power, and growing….

The agents of IFS now have the best of both worlds. An independent agency structure with outstanding support, fringe benefits and the backing of one of the country’s oldest mutual insurance carriers, Ameritas.

In April of 2014, our agency moved from its original location of Wall, New Jersey to a larger office in Matawan, New Jersey. With several offices throughout the tri-state area, we are in a position to grow.

After being in business for 7 years, we are now focused on the next 5 years – the year 2020. Our focus is clear and our future is now in sight.

Contact us today and learn why on average one new person joins our organization each week!

Our purpose is to help people with financial education so they may live a better life.

Our mission is to share our values and beliefs with the world.

We Believe:
In listening to people’s needs and wants.
In helping one person (family) at a time.
In giving back to our community.
That only by helping others first can we be profitable and successful.
In ongoing education so we can provide the best financial knowledge to our clients that they rely upon us for.
In this industry so we seek to add new people to strengthen it, people who are honest, trustworthy, ethical, knowledgeable and strive for success for themselves and those they care about.

We offer the best selection of products in the market

The IFS Difference, Experience the best of Two Worlds

Contact IFS Today to Experience the Best of Both Worlds!

IFS is licensed in many states with offices in New Jersey and New York.

Representatives of AIC do not provide tax or legal advise.  Please consult your tax advisor or attorney regarding your situation.